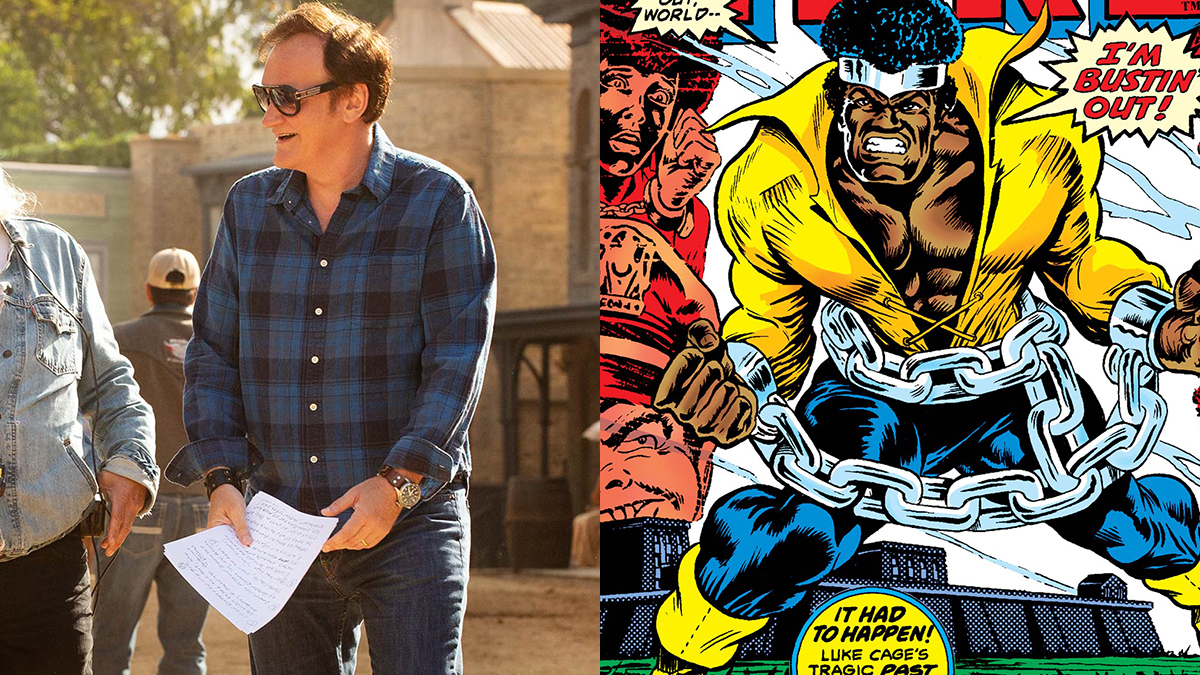 “There
was a time before all this Marvel shit was coming out,” Tarantino said. “It was
after Reservoir Dogs, it was before Pulp Fiction, and I had
thought about doing Luke Cage. Growing up I was a big comic book collector, and my
two favorite [comic books] were Luke Cage: Hero for Hire, later Luke
Cage: Power Man, and Shang-Chi: Master of Kung Fu. I also
liked Werewolf by Night, that was a great one, and Tomb
of Dracula was great, but my absolute hero was Luke Cage.”

After
going on to stress that he was the only white guy he knew who collected Luke
Cage comics over all other superheroes, Tarantino noted that this would not
have replaced Pulp Fiction as his second film. Rather it could’ve been his
third movie instead of Jackie Brown. He just couldn’t
settle on casting.

“What
actually dissuaded me from doing it… was my comic geek friends talked me out of
it,” Tarantino explained. “Because I had an idea that Larry Fishburne would’ve
been the perfect guy to play Luke Cage. And I’m talking King of New York era
Larry Fishburne. ‘My name is Jimmy Jump.’ … But All my friends were like, ‘No,
no, listen, it’s got to be Wesley Snipes.’ And I go, ‘Look, I like Wesley
Snipes, but Larry Fishburne is practically Marlon Brando. I think Fish is the
man.’ And they’re like, ‘Yeah, but he’d have to get in shape in a big way.
Snipes is that way already!’ And I go, ‘Fuck that! That’s not that important!
Fuck you, you ruined the whole damn thing!’”

That
might be true, although we also wonder if the fact Pulp Fiction went on to
be a cultural phenomenon, winning the Palme d’Or at its Cannes premiere and
going on to earn $214 million at the box office while racking up Tarantino’s
first screenplay Oscar had a little something also to do with him stepping away
from comic book movies. Then again, he did follow up Jackie Brown with an
unapologetic paean to Kung Fu films, Samurai epics, and Spaghetti Westerns with
the Kill
Bill saga, and then pivoted to straight grindhouse exploitation via Death
Proof.

It is interesting though to wonder how the superhero genre might’ve been affected if Tarantino did a Kill Bill styled epic decades before the likes of Christopher Nolan or then the Marvel assembly line defined it in the 21st century. Then again, we’re very happy to have Jackie Brown in this world, one of Tarantino’s best (and most underrated) films. Snipes, meanwhile, got to star as a Marvel Comics superhero after all when he played Blade, a character spun off from the Tomb of Dracula comics!

No
matter what, it’s good to know that even in the ‘90s, comic book fan casting would
still miss the mark by focusing purely on physical aesthetics instead of talent…

“I’m a fan of a good healthy surprise.” Director Andy Mitton on his new horror: The Harbinger
Slow Horses: Gary Oldman Spy Thriller Deserves to Be as Big as Line of Duty
The Last of Us Episode 2 Review: Anna Torv Steals the Show as Tess
Even More DC Shows Have Been Axed at HBO Max
Dead Space Remake Release Time: When Will the Game be Playable?