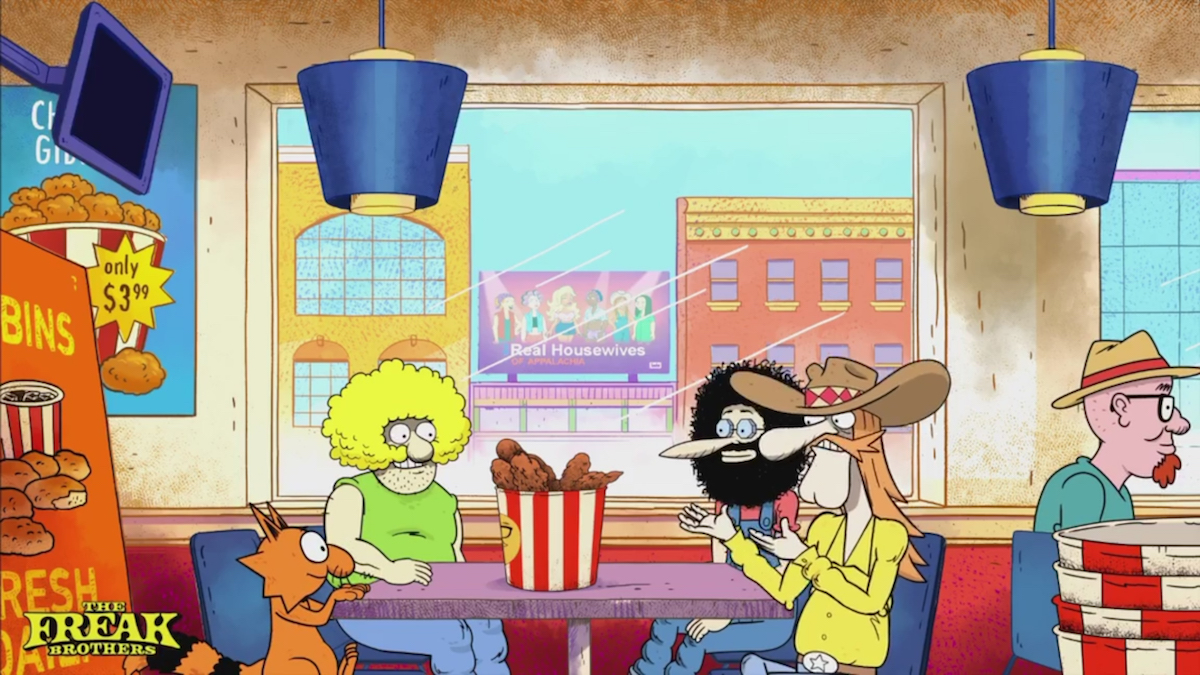 Times are strange, man, and it takes some strange men, and one crazy cat, to make sense of it all. The Freak Brothers, which comes from the producers of Highly Gifted and King of the Hill, and was animated by Starburns Industries, aka Rick and Morty‘s alma mater, made its world premiere with a mini-episode that’s finger-licking good.

“In 1969, life in San Francisco consists of free love, communal living and political protest,” posits the Freak Brothers logline. “Freewheelin’ Franklin Freek (Woody Harrelson), Fat Freddy Freekowtski (John Goodman), Phineas T. Phreakers (Pete Davidson), and their mischievous, foul-mouthed cat, Kitty (Tiffany Haddish), spend their days dodging many things—the draft, the narcs, and steady employment—all while searching for an altered state of bliss. But after partaking of a genetically mutated strain of marijuana, the Freaks wake up 50 years later to discover a much different society. Quickly feeling like fish out of water in a high-tech world of fourth-wave feminism, extreme gentrification and intense political correctness, the Freaks learn how to navigate life in 2020—where, surprisingly, their precious cannabis is now legal.”

The producers will deliver eight 22-minute episodes, along with several mini-episodes. The premiere clip features John Di Domenico guest-starring as Donald Trump. The series was written and produced by Dave Krinsky and John Althschuler from Silicon Valley, and Highly Gifted’s Daniel Lehrer and Jeremy Lehrer. This series will be animated by Starburns Industries (Rick & Morty) and Pure Imagination Studios (The Simpsons).

The showrunners are Alan Cohen and Alan Freedland, best known for their work on King of the Hill. Blake Anderson and Adam Devine (Workaholics) are executive producers. It is being co-executive produced by Jeffrey S. Edell. Jeffrey S. Udall, Mark Canton and Courtney Solomon, who produced the comic the series is based on, are also producing.

The Last of Us Episode 4 Review: Don’t Cross Melanie Lynskey
The Last of Us: Who Is Kathleen In the Games?
Why Dragon Quest Has Always Been So Much More Popular In Japan
Hogwarts Legacy PC Performance Issues: How to Fix Frame Drops and Crashes
Happy Valley Series 4 Won’t Happen, and That’s Perfect