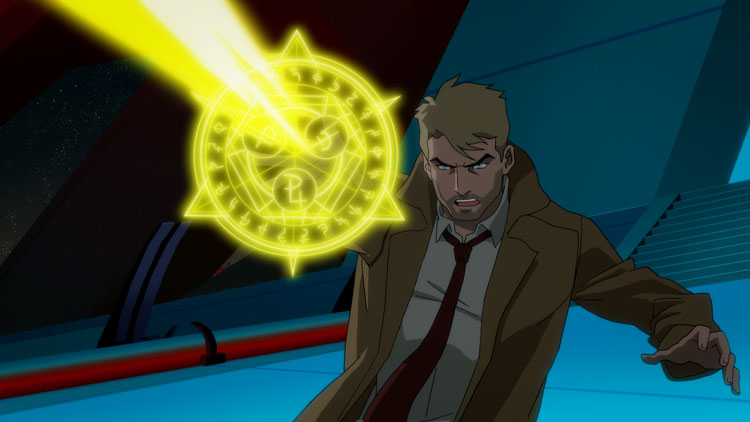 How did you get involved with Justice League Dark?

I was a cartoon writer and I had worked with Alan Burnett years earlier on a show called Static Shock. And he knew me since then and we talked. Then at a certain point he was trying to find me stuff. The first Justice League Dark turned up and they needed somebody

So I did the script for that one and it just so happened that Constantine is my favourite DC character. I know it’s really easy to go ‘Batman’s my favourite’ or Wonder Woman or Superman or something like that but I’ve always been drawn to the kind of low life characters with a heart of gold and I just really really like that about him. So, my first DC animated long forms had him as the lead – I was so psyched.

How much inspiration did you take from the comics for Justice League Dark?

This is kind of bad, but I haven’t read [Darkseid War]. When I got on to Justice League Dark, [producer] James Tucker had some specific ideas of what needed to be concluded from this continuity. So I had worked on four of these (three had already been out) and I had watched some of the other ones and he filled in the gaps with [co-producer] Jim Krieg about the overall arc of this thing. So it’s its own thing really. I guess it shares part of a title with Darkseid War. But I’ve heard it’s very different. One day I’ll have to read it but I’m very behind.

What do you think of the DC animated movies?

They’re fantastic, I was a fan of them first, before I ever got a chance to write the first Justice League Dark, I was watching the movies, in continuity and out, I was just a fan of the creative forces that were involved in it. To be a part of it is just frankly an honour.

Had you always known how the Justice League Dark story was going to conclude?

Yeah actually James Tucker, Jim (James) Krieg and [story/teleplay writer ] Mairghread Scott had worked on what I thought was a great solution. So, I always knew I could work to that point and everything would be okay. I just added a couple more twists and turns into it.

How much freedom did you have with the characters and the story?

So for that I picked out Etrigan and Captain Boomerang as these are the characters that are going to give us some comic relief in addition to Constantine. I think Constantine’s always funny, he’s just like bitter and sarcastic and that’s always great.

So there wasn’t anything that was off-limits?

Nope! No limitations. This was the big ender. It was drawing the continuity to a close. I actually saw a great Tweet by James Tucker that says when he’s ending a storyline; he’s like a bad tenant being kicked out of the house, he’s going to wreck everything! That’s exactly what we went into it with. No one’s safe. People are going to see big characters go down and be shocked by it. With the ending that we got, everything’s open. The sky’s the limit. I’m very excited for what’s coming next.

Was there a character that you didn’t enjoy writing for?

You know what, I can’t really say that there’s any I don’t enjoy writing. Sometimes I’m like ‘oh I don’t know; I don’t think that character’s powers or story are that great’. But then you look into the character and you find some sort of corner of ‘this I like’ and then you’re going to do your own version of it so you have to love em all.

If you don’t enjoy writing a character it’s going to show up on the page. Plus the way they task these things, they get such fantastic [voice actors] in there so I just don’t want to be embarrassed at not giving my all, even for the smaller characters. For instance, Captain Boomerang has maybe a dozen lines. I enjoyed Liam McIntyre’s version of Captain Boomerang in Suicide Squad and I was like, can I put him in? I’ve never written this character before, but I think he’s very interesting. And that turned out great, that seems to be one of the fan favourites along with Etrigan, Ray Chase who was fantastic.

It goes without saying, but there is fantastic work by all the leads: Matt Ryan, Jason O’Mara, Jerry O’Connell, Rebecca Romijn… I’m so happy to be writing dialogue for their versions of the characters.

Was it important for you to add some humour in this dark tale? Etrigan is especially funny in Apokolips War even though he doesn’t rhyme…

Yes, it was. And you know what, [with Etrigan not rhyming] that was my kind of solution because I’m really a crappy Etrigan rhymer. If you’re not Alan Moore, maybe don’t try it. I had to do it in the first one and it was just hard. I still don’t know if it worked totally but people seemed to like it. And when am I ever going to get a chance to write an ’emo’ Etrigan – Emo-trigan right?!

Apokolips War brings in characters from all corners of the DC Universe, was this a conscious decision?

Yeah when James and Jim were thinking about it with Mairghread, I think they made the conscious decision (the right one) to focus on one character from each of the groups that we were going to use in this all-encompassing film. It was going to be Superman from the Justice League, Constantine from Justice League Dark. Then Raven for the Titans and Harley for the Suicide Squad (she’s just like a force of nature so that was a no-brainer).

Each of the groups needed one main pillar. That way you had the other people in the group around them in the scenes, but they were all driving forward in the story to where they meet in the end. It all comes down to the same pinpoint of time. What’s going to happen? Are they going to win or are they going to be defeated?

There are some great team-ups between characters who we don’t usually see team up – what are your favourites?

I do love the Raven and Superman team-up. I also really enjoyed writing the Raven/Damien arc. Talking about a character that I didn’t like. Damien, I’m one of the people that thinks Damien’s a brat. I’d like to see some other Robins out there and I’d always ask James: can I kill him? Can I be the one that kills him, please?! But the thing is, after I did the [Raven/Damien] relationship in the Judas Contract I was like “ehhhh I kind of like him now”.  And then when I saw the designs for adolescent Damien, I was like “oh no now I don’t want to kill him!”.

Even though there’s so much death and destruction in Justice League Dark: Apokolips War it’s also about love! The love between Lois and Clark and Damien and Raven and also of course my boy, the hell blazer, Constantine and Zatana. Those bonds are the things that prevent them from losing to all of the bitter defeats, right up until the very end. It’s really fun to do that.

Hogwarts Legacy Review Roundup: Is This the Dream Harry Potter Game?
Scream VI directors: “We had some apprehension.”
Crossroads’ Most Bonkers Storylines
The Last of Us: How Long Does It Take to Beat the Games?
What Better Call Saul Got Right