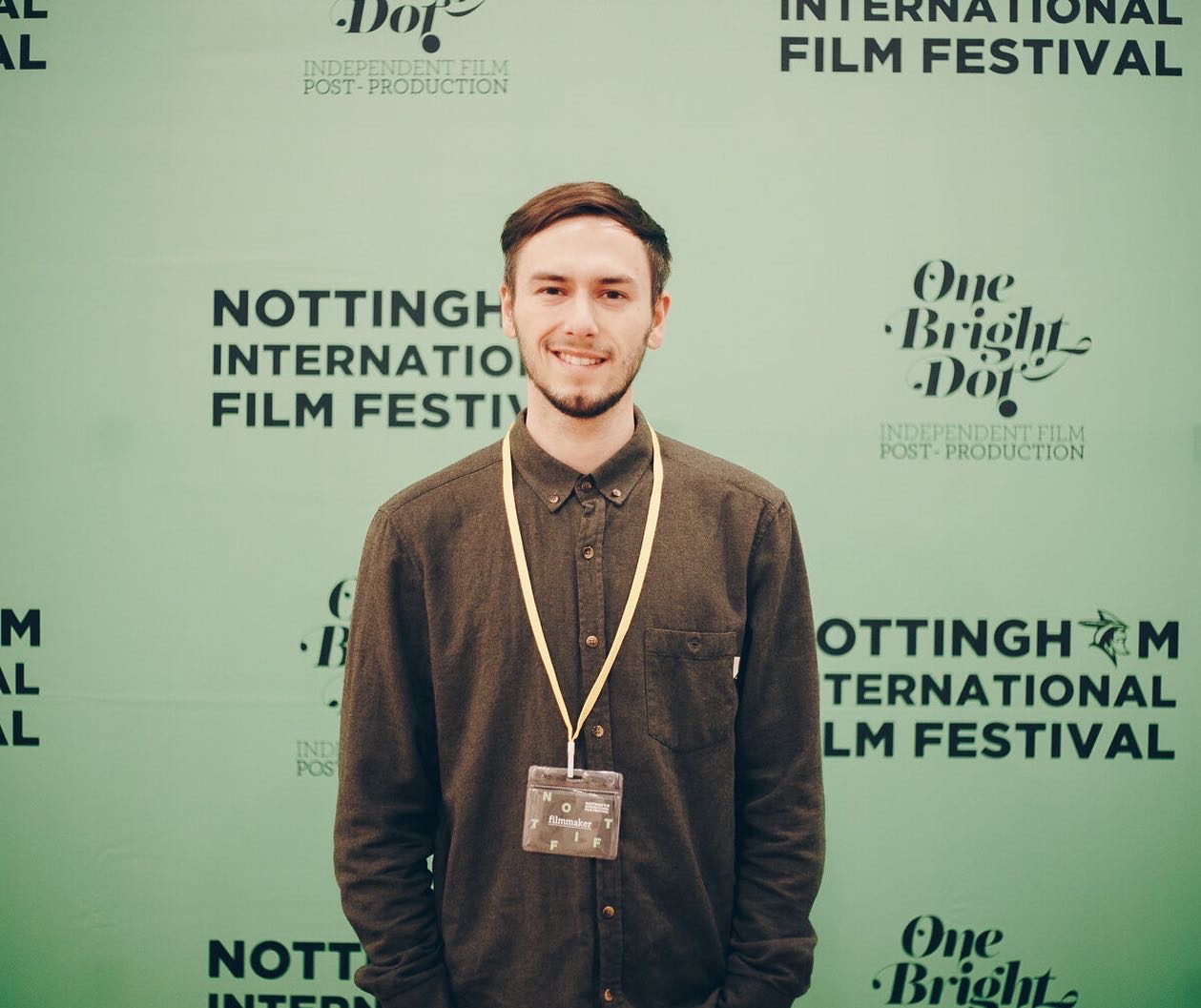 Can you tell us a little about your newly-released short film, Re-displacement?

Re-displacement is a sci-fi drama about a young man, Leo, who is searching for answers from his past using a futuristic therapy where he can visualise his memories. I wanted to create a high-concept film that explores complex emotional themes, through a sci-fi lens. At the heart of the film is a very personal drama, but by placing this story in a science fiction world, we are able to explore the character’s mind in a very visual and surreal way and dissect the concept of memory and its reliability.

The story begins in a modern therapist’s room, then moves between various visually-striking locations that are all fragments of Leo’s past. Some of these are beautiful, peaceful places and some are dark and eerie. I wanted to immerse the viewer in a very unstable and volatile world and chose to take them on a predominantly visual journey that replicates the erratic, unpredictable nature of a mind in crisis.

Can you remember when you first thought of the story? What was your process in writing the film?

I usually have quite a long gestation period between having the initial idea to actually getting anything written down. I like having the themes float around my mind for a while before I decide the exact focus that the story will take.

For Re-displacement, before I knew anything about the character or plot, it was always a very visual idea. I knew I wanted surreal, experimental cinematography that was almost otherworldly. I knew I wanted an eerie and futuristic soundtrack that blends between scenes as we jump from location to location – and I knew I wanted the narrative to be ambiguous and meandering which poses more questions than it answers. This encapsulates the human mind for me, a very sensory experience, but one that is unpredictable and rarely straightforward.

It probably took around six months of research and scriptwriting until I had a first draft I was happy with, then lots of tweaks and development up until production. Choosing the right ending was tricky – I didn’t want to completely round everything off in a big climax or anything, I wanted the character to reach the end and feel like the journey’s still continuing. We’re left with a more thoughtful and ambiguous conclusion where the audience is forced to fill in the gaps themselves.

There’s a very distinct style to the direction of the film – were there any particular inspirations or touchstones to you for this style?

Visually, I’m inspired by a lot of directors – Aronofsky, Kubrick, Sam Esmail – but I’m yet to pinpoint which ones directly inspired Re-displacement. I think location and how we use space was really important for me – as it’s a sci-fi film – but most of the film doesn’t happen in a futuristic world, I wanted to make sure the locations we used were really striking, almost resembling a dream-world.

The director of photography I worked with, Sam Travis, is a good friend of mine and was able to capture these locations and the actors in such unique ways. There was a few shots I had in-mind beforehand that we had storyboarded closely, like the silhouette shot against the trees and the therapist scene, but Sam was so in-tune with the script and what we wanted each scene to convey and just knew exactly where to point the camera to get the best result. Filming is always very intense – trying to capture your story with the same ambition you have before shooting, so having a crew around you that can be adaptable and still work to such a high standard is truly special. Sam and Ana Garcia Rico, my assistant director and production designer, both offered so much towards the visual aesthetic of this film and it is as much a showcase of their work as it is mine.

Was Re-displacement always intended to be a short story?

It’s a very high concept narrative and definitely has room to be adapted into a feature or series. There were other characters and definitely other avenues that I had thought about exploring during the writing stage, but I’m still at the stage in my career where short films are the most affordable and successful way of showcasing my work.

The cast, crew and lots of audiences members at festivals have mentioned that the film would work very well as something longer form, so if our release with DUST is successful, there could definitely be room for going back to the writers’ room to develop it further!

Is there a difficulty with short films on where to finish the story and what to cut?

There definitely is – we usually work with a 15 minute runtime being the maximum that online audiences want to watch and also the maximum short film festivals want to programme. There’s not the room to slowly develop characters and plot in the way you would do in a feature or series, so the more you can show visually without having to explain it in dialogue, the better!

It’s usually more effective to try and tell a simple story with a standard start, middle and end – however with Re-displacement, I seem to have thrown the rulebook out the window and packed some quite complex ideas where the start, middle and end are kind-of blurred together. I don’t think it’s a very conventional short film, but hopefully it’s one that stands out because of that.

There is the use of different colours in the ‘dream world’ as well as different locations – how did you decide on these and are there any certain meanings behind these?

I wanted to think of the most visually interesting locations we could find that would act as a snapshot of memorable moments from Leo’s past: his childhood living room, a haunting forest, a wobbly blue aquarium. As the narrative jumps from place to place, we understand that Leo’s thoughts are shifting in his search for answers.

This perfectly captures the unpredictability of the mind that I wanted to explore, but I was concerned that this would make the film too jumpy and confusing for audiences. So Sam and I worked closely on colour schemes that would slowly transition through the film – moving from blue, watery locations to oranges and browns as the story gets darker, to more neutral colours at the end when we hope Leo has found some sort of resolution.

There are a lot of themes to get across in Re-displacement with minimal dialogue – what was the process with the actors to get these themes across in the performance?

Nico Mirallegro (who play’s Leo) is a very talented actor and was really great to work with. He brought so much more to the role than was written in the script and really embodied everything I hoped Leo’s character to be. We had discussions about the character during the script development stages where Nico made suggestions about how he thought Leo would be feeling in different scenes and aspects to his backstory that I hadn’t considered, which really helped flesh out the character when we got to shooting.

There isn’t a lot of dialogue in the film, but so much emotion is told through the subtle facial expressions and gestures Nico makes in each scene. The confusion and fear that the character feels is expressed perfectly in Nico’s subdued performance of Leo, that by the end, we just want him to find the answers he’s been searching for.

Nathalie Cox who plays Leo’s therapist exceptionally well, really helps to set the uncomfortable mood of the film by explaining a lot of the exposition and detail of the story in such a way that you aren’t sure whether to trust her or not. Her voice echoes in Leo’s mind throughout the film, but we’re never sure whether her advice is truthful, or is manipulating him for her own gain.

I’m currently writing another short film in a similar sci-fi vein as Re-displacement, as well as two pilot episodes for a series of a different genre. I’m also producing a short film that is being funded by the BFI which we hope to get stuck into filming once the lockdown has safely lifted.

I’m very excited to have Re-displacement’s digital premiere with the incredible platform DUST and hopefully this will bring us opportunities to develop new work with them in the future.

The Last of Us Episode 5 Release Time: HBO Schedule Change Explained
The Ark’s Sci-Fi Tropes Are ‘There For a Reason’
Hogwarts Legacy: How to Unlock and Claim Twitch Drop Rewards
Hogwarts Legacy: Early Access Start Time and How to Join
The Legend of Zelda Tears of the Kingdom: Where to Pre-Order the Standard and Collector’s Editions