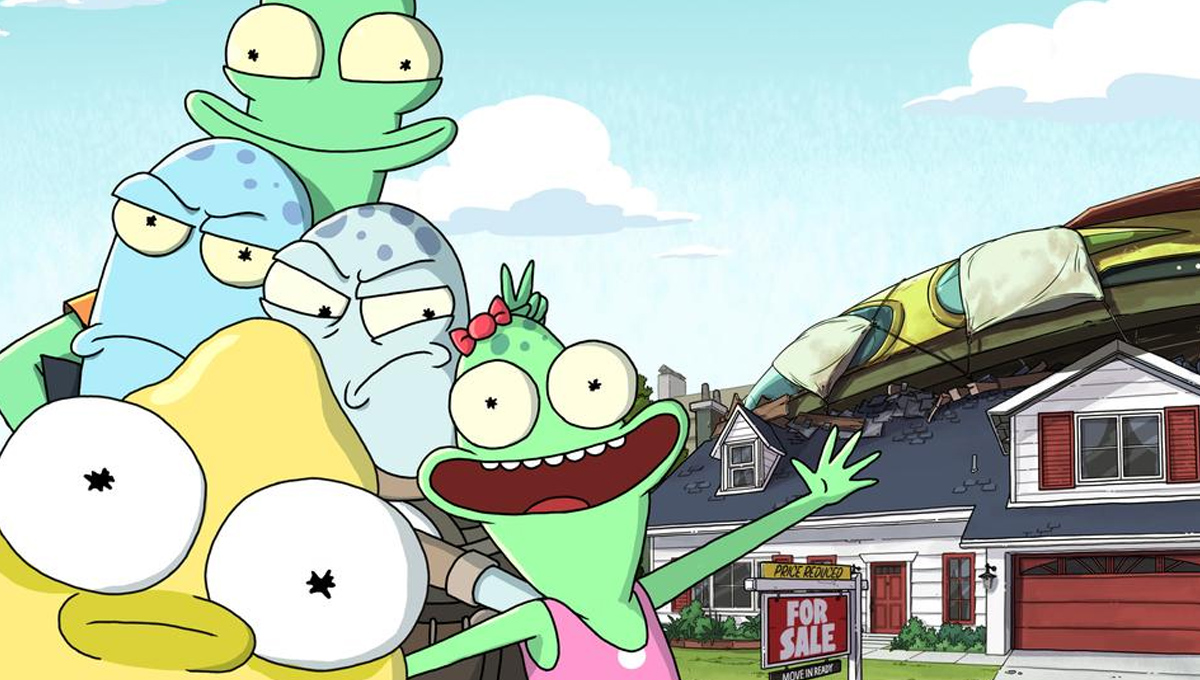 The existential dread that comes as part of the package deal with someone like Rick is largely missing. There’s no God-like character struggling to justify his increasingly meaningless existence on earth. Terry and Korvo are basic fools on earth who manufacture their own conflicts by constantly finding something new to obsess over. In one episode they want to meet a character from a TV show they like so they put all their efforts and sci-fi tech toward that. In another, they can’t let it go that their neighbors don’t like them, so they go way too far to rectify that. In our interview with Mike McMahan, he said if Rick and Morty is like a newer, single-camera sitcom (a la Arrested Development, Community, or 30 Rock), Solar Opposites is an old-school, multicamera show (Cheers, Home Improvement, Frasier) and the comparison is apt. This series is mostly about watching a family of alien dumbasses screw things up for stupid reasons.

Solar Opposites functions well as a show in the classic sitcom format because every member of the family is strongly characterized, we spend an evenly divided amount of time with all of them, and they’re all lovable. In addition to Korvo and Terry, there’s the replicants (the kids, effectively), Jesse (Mary Mack) and Yumyulack (Sean Giambrone). There’s also the Pupa, who doesn’t really talk, but gets its own charming, Maggie Simpson-esque plotlines, too. So far, the character pairings stay pretty consistent: Korvo and Terry have one conflict while Jesse and Yumyulack deal with something else (usually to do with school), but each character is so fun on their own, I’m confident they can swap them around to shake up their adventures in future seasons.

I can’t stress enough how great the voice cast is. The principal cast is all highly expressive actors with hilarious, cartoonish voices. Sean Giambrone and Mary Mack seem especially well-suited to playing these goofy-looking aliens. Mack’s Jesse is so adorable and hilarious, it’s a treat just to listen to her every time she’s onscreen. There are other wonderful performances outside of the main cast, too. Some notable mentions are voice acting royalty Tom Kenny and Kari Wahlgren, as well as Andy Daly and Alfred Molina.

The show deviates from its sitcom roots in its use of serialization. Solar Opposites brings plot elements and side characters from earlier episodes into later ones, but doesn’t get bogged down with a big overarching storyline, staying mostly concerned with silly, self-contained conflicts. The serialization is still used to surprising dramatic effect in a unique, inspired way, however, but I’ve said too much already.

Happily, the two key features of Rick and Morty also present in Solar Opposites are a decent budget and complex writing. It’s a good thing Hulu doesn’t skimp on their shows just because they’re online as this series is stuffed with great-looking, madcap, violent action set pieces. The show wouldn’t be out of place alongside other adult TV animation (that is, if it weren’t for the gleeful, constant, unbleeped profanity).

Pokémon’s Ash Ketchum Says Goodbye to the Role of a Lifetime
Slow Horses: Gary Oldman Spy Thriller Deserves to Be as Big as Line of Duty
Junji Ito Maniac: Ranking the Stories From Creepy to Downright Terrifying
Xbox and Bethesda Showcase: Start Time and How to Watch
Best Nintendo Switch Settings You Should Be Using