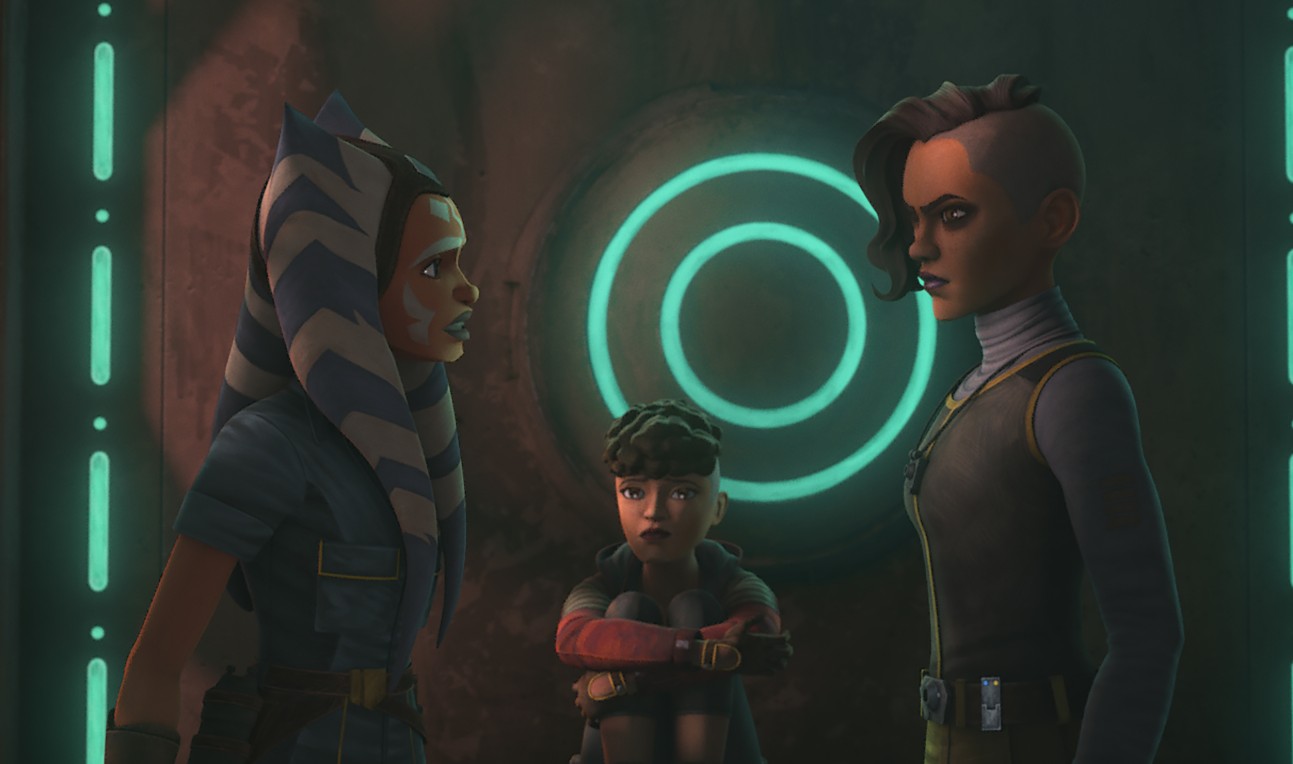 Ahsoka herself shines in this new environment. Her dynamic with Anakin and Obi-Wan has charmed a lot of fans, but I often found the way she played off Anakin repetitive, which didn’t allow her to grow and develop as a character. In a new place, she clearly stands out from the people around her. Maybe it’s because I grew up as a church kid that the sisters’ skeptical responses to Ahsoka’s platitudes are so relatable. She’s clearly strong and accomplished, and also actively learning, growing, and interacting with the people around her. Being a Jedi is just one part of that.

What is the arc saving the reveal of Ahsoka’s Jedi powers for? Several moments in this episode were almost comical in terms of how many opportunities she had to use the Force and how subtly she ended up using it. Why not reveal her powers to the sisters when all three of their lives are on the line?

But the episode does lay some groundwork for this. The sisters’ parents were killed when a Jedi threw a speeder into the side of their apartment during a high-speed chase and left them with nothing but the Star Wars equivalent of thoughts and prayers (“the Force will be with you”) to rebuild their entire lives. Again, this arc shows how the carelessness of the Jedi can hurt regular people.

Even if the Jedi do care about the people they hurt, they don’t do anything directly about it. Rafa’s abandonment reminds me of when Qui-Gon left Shmi on Tatooine but rescued Anakin from slavery because he was Force-sensitive. The direction of the movie lets the audience decide how they feel about the implications of this (or, depending on how you feel about The Phantom Menace and Attack of the Clones, decide these movies aren’t deep enough to provide moral texture). In The Clone Wars, the condemnation of the Jedi is much more obvious.

Ahsoka knows the conversation is going to be a hard one once she reveals she used to be a Jedi. Although I like this arc overall, the biggest problem continues to be a lack of introspection from Ahsoka. This episode forgoes even dramatic, yearning looks, making me wish we got some more scenes of Ahsoka by herself working through the many things she’s feeling. On the other hand, we know she isn’t a character who tends to do a lot of navel-gazing, a trait that tends to help her when she needs to make split-second decisions — like the times she does use the Force to help the group escape.

The “fortune cookie” that opens the episode says “who you were does not have to define who you are,” a possible reference to Rafa or to Ahsoka. I’d love for this arc to explore who Ahsoka is becoming, but that just isn’t the case. I love the idea showrunner Dave Filoni has about Trace and Rafa representing two options for who Ahsoka could become, but I’m not sure how much that comes through in this episode. All three girls are growing closer together, though, and that’s entertaining and heartening.

Why Devil May Cry 2 Is Still the Most Disappointing Video Game Sequel Ever
Why Pierce Brosnan Will Always Be Gaming’s Greatest James Bond
Best Nintendo Switch Settings You Should Be Using
Dead Space: What Happens In the Remake’s Secret Ending?
Teen Wolf: The Movie Ending Explained