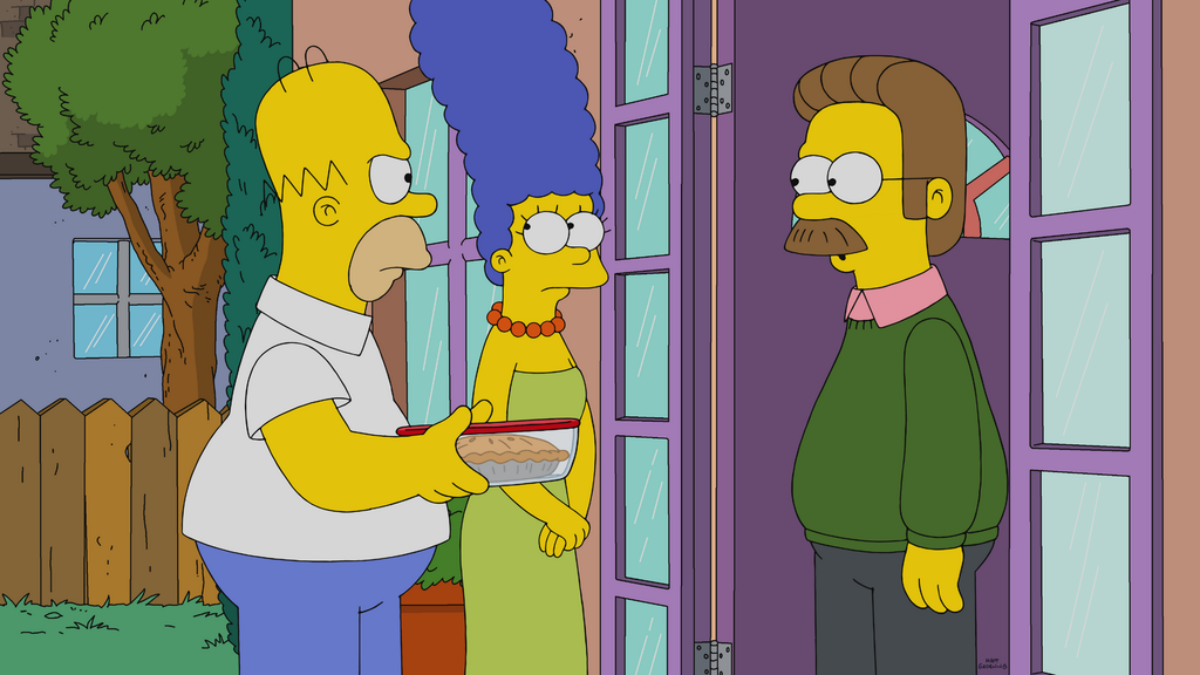 It is well-known canon that Principal Skinner was a POW during the Vietnam War, and his first reaction to the crisis makes sense. He pees his pants, which is the event to start the panic. Ned saves the day, throwing himself on the grenade, but the fallout is oddly scattered. Kirk Van Houten, Millhouse’s dad, is subbing as the new school mascot, a vulture who doubles as the mascot for a semi-amateur hockey team. The guy who usually wears it got shingles and this gives The Simpsons a chance to further scar Millhouse, who sought shelter in the back end of the outfit and kept going until you don’t want to know how far. It also reveals that Nelson’s mom and Superintendent Chalmers had a thing going, something the school administrator is willing to pay good money to keep quiet.

The incident ends like the aftermath of a school shooting. There are fire trucks and grieving parents reuniting with their children, crying in the hall. It is a skewered take on the situation, but not twisted enough to mine true subversively comic or satirical value. Rather than being hauled off to some juvenile detention center, the school administrators decide to expel Bart. But Ned, once again steps in, swearing he can change the boy with the three Ps: persistence, prayer and persistent prayer. This hasn’t been tried in public schools since 1962, when the Supreme Court of New York ruled it an unfair mix of church and state.

Religious commentary returns later in the episode when the Christians throw a pride parade. Christians can finally show their faith proudly. One float boasts an “innocent priest,” implying he may be the only one in the town. In the crowd, we can see two signs: “Jews for Jesus” and “Atheists for no one,” reminding the viewers who continually tries to steal Christmas. Vendors sell crowns of thorns made from balloons for the kids. Lisa leafs through an issue of the “Christian Not Science Monitor.” Mayor Quimby officiates because “right wing ding dong‘s will keep him in office forever” for it.

Early in the episode we see, even under threat of death from a pulled hand grenade, Bart will not give in to prayer. But soon he’s singing “Amazing Grace” with an angelic voice only a bone-eared intellectual music connoisseur like Sideshow Mel can trash. Another reveling moment comes when Ned reacts to one of Bart’s pranks by threatening to draw real blood from the boy. This harks back to the time when Ned was diagnosed with emotional suppression, rendering all his most horrific and violent impulses into a litany of oodly-doodlies. Ned’s first lesson comes from Jonah, I think. Rather than give Bart some fish, Ned teaches him to fish for himself. Bart experiences a flush of emotions he likens to a downed power-line at a waterpark, but still spits in his hand before he gives a left-handed handshake to his school-board-appointed mentor.

At first, Homer sees the Flanders appointment as a win-win situation. Bart doesn’t get expelled and he doesn’t have to do anything. Ned starts to get too much credit. Besides the initial barring of his fatherly influence, no one recognizes the importance of how much Homer messed the boy up in the first place. Homer isn’t as dim as it would seem. He bemoans and moans about having to give up calling his next door neighbor “stupid Flanders” because he thinks Ned is laughing under his bushy mustache. But, carry the math and he’s right. Ned is laughing.

Where to Find a PS5 and Xbox Series X In 2023
Forspoken Is That Frustrating Piece of Entertainment That Gets Good “Eventually”
Snowpiercer, Infinity Train and Other Erased Streaming Series You Can No Longer Watch
The Last of Us: Episode 3’s Final Scene Is More Important Than You Think
Crossroads’ Most Bonkers Storylines