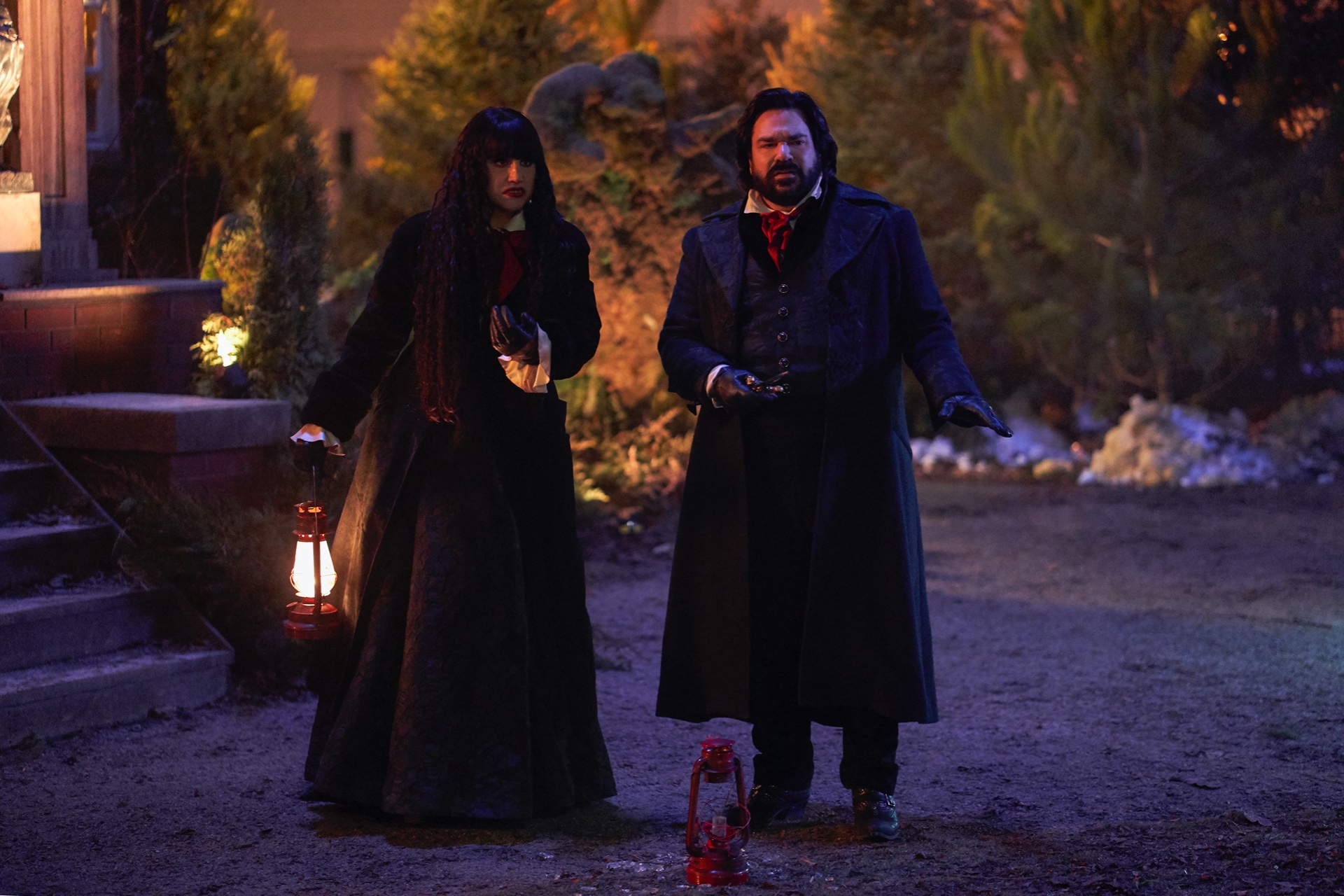 We learn two things about Laszlo right away. The first is that he plays guitar at all. It is a perfectly random detail which automatically makes senseless sense. The second is his reaction to the intrusion and demand. He is all bravado, accepting a duel rather than settle up with his former landlord, until he’s just a few steps into the turn-and-fire moment, at which point he reverts to the Laszlo he truly is. First he transforms into a bat, his go-to getaway, and then into something quite different.

Laszlo finally gets a shot in the spotlight. It’s a shame he spends it hidden behind a toothpick. We can barely recognize him incognito. It is funny that this is taken so seriously, both Laszlo and by his nemesis, played by Mark Hamill. The only one who seems to have fun with the premise is the long-suffering Nadja, who either doesn’t recognize her husband when he’s sucking wood, or it’s part of the sexual roleplay. Either way works, because if he truly is transformed in the eyes of his vampire peers, she can have sex with another man and not cheat on her husband.

But let’s look at the toothpick itself for a moment. It is actually a perfect item for the disguise. Toothpicks are like little stakes, which are used to pierce the hearts of vampires. And here they are, so close to the teeth. Laszlo is far more vulnerable than he appears. The other weapon featured in the episode is a pool cue. The bar battle is also masterful. First it references Hamill’s other role as a Jedi master, but then it turns from light saber to the light from the savior. The two vampires face off against each other with the broken cue stick held in the cross position, but the cross actually affects the person holding it, not the opponent. Yes, they can barely bear to look at a cross, but that’s only because touching it is what does the damage.

Jackie Daytona’s life, it ain’t so bad. Laszlo’s alias relocates to Pennsylvania, which is a cool place because it sounds like Transylvania and is the only vania in the U.S. He says he’s from Tucson and swears that’s how they talk in Arizona, pronounced “Arizonia.”  The fancy talking new bartender has got a friend in Billy Bass, the rare talking fish decoration over his bar. He is completely modest, covers up all the mirrors in the bar, and does amazing shadow puppetry. Jackie Daytona is a simple, regular, human guy who supports the local volleyball team and gets to kick ass. The biker gang who intrudes on the bar’s parking lot may only have been trying to raise money for Toys for Tots, but if there’s one law vampires apparently take very seriously, it’s the no soliciting rule.

For a guy on the run, Laszlo doesn’t travel light. He buys an expensive truck to hang his “Go Bucks” bumper sticker and takes along the camera crew. He even addresses them, thanking the chaps for accompanying him while he takes it on the lam. If he hadn’t chosen to take them, then they would have had to find him, which behind that toothpick, is pretty hard. Even when the mysterious stranger comes back and looks Daytona right in the eye, there is no recognition.

Pizza Tower Is the Best New Wario Land Game We’ll Probably Ever Get
The Portable Door: Sam Neill and Christoph Waltz star in new fantasy
HBO Max New Releases: February 2023
The Last of Us: How Long Does It Take to Beat the Games?
Dead Space Remake: Where to Find Every Schematic